Hunting traditions run strong in South Dakota. It’s not only our birds that draw people to Pierre, though. It is our hunting heritage, dog-friendly hotels, wildlife rearing habitat, amazing restaurants and local residents that make a trip to the Oahe region worth taking. While planning your adventures in and around Pierre, be sure to check out SDGFP Hunt Planner for information on draw statistics, eligibility requirements and season info for many game species.

Residents and visitors alike look forward to opening day of pheasant season like kids awaiting Christmas. Some call it “pheasant fever”. Feelings of excitement, sleepless nights and an itchy trigger finger are all common symptoms of pheasant fever. Fortunately, we have the cure in central South Dakota.

Pheasants love our habitat! The mighty Missouri River does not only produce world-class walleye fishing, but also over 2,000 miles of shoreline open to public hunting. You can walk the picturesque shores of Lake Oahe and Lake Sharpe in search of wild roosters who will make you earn every shot!  Fortunately, we also have landowners in who focus on developing habitat for wildlife. Amazing guides and outfitters (link to chamber master) can make a traditional pheasant hunting adventure into a once-in-a-lifetime experience. This is especially beneficial to novice or youth hunters who just want to SEE a bird or fifty! These options coupled with a variety of public hunting access points and the Fort Pierre National Grasslands, makes the Pierre area one of the top producing pheasant hotspots in South Dakota.

Early season pheasant hunting is a literal BLAST! Birds sitting tight, dogs busting cover and beautiful autumn weather to enjoy it all in. Bring plenty of shells (remember non-toxic shot is required on any waterfowl and game production areas) and plenty of water for your hard-working pups. Blaze orange is not a requirement when hunting pheasants in South Dakota, but it is strongly encouraged to don at least a hat or vest. We recommend using 6, 5 or 4-shot (a combination of the three) on early season birds coupled with improved cylinder and/or modified choke tubes. There ARE rattlesnakes in central South Dakota, so be aware. If you are planning an early season trip to Pierre, have your dogs vaccinated and snake trained, if available to you.

Hint: October can be one of the best months to catch big walleyes on Lake Oahe and Lake Sharpe. Don’t forget to bring your rod and reel for a cast and blast weekend!

As the weather changes, so do the habits of our wild bird population. Habitat becomes key with cattails, shelter belts, stock dams and thick cover holding groups of leary birds. The cold weather brings groups of birds together, which can be fun to see as a hunter, but will make getting shots at birds a bit more difficult. Our shell selection will consist of longer-range shot and choke options. Choose 4, 3 and 2-shot to go along with a modified and/or full choke tube. This will give you a chance at those birds that get up 30-40 yards away. Late season birds can be a bit frustrating to track down, so here are a few tips to help you find success while you’re here later in the year:

Birds of the prairie are beautiful and hearty. They have evolved as a species to withstand the harsh South Dakota weather and environmental extremities that constantly push back at them.  The Fort Pierre National Grasslands is the epicenter of sharptailed grouse and greater prairie chickens hunters and birding enthusiasts have come to appreciate so much. In the spring, these birds display their talents for anyone dedicated enough to take the time to witness it. Their mating rituals are worthy of a David Attenbourough narrated documentary.

The sounds of these birds, on its own, can give you chills. Seeing it in person is a special experience.

Hunting these critters is a different story. Unlike pheasants, who use habitat for cover and protection from predators, prairie grouse use the openness of the prairie to their advantage. Many sets of eyes keep a keen lookout for anything potential predators. Once they sense danger, they take to the sky…and they aren’t coming down anytime soon. Just watch and enjoy the view. Long walks in the prairie, working your dogs and good shotgunning principles will lead to bagging sharpies and chickens on the prairies around Pierre. These birds can be found in large quantities on the Fort Pierre National Grasslands along with public lands north, east, south or west of Pierre/Fort Pierre, making us the best basecamp for your prairie grouse expedition.

Daily Limit:  3 (any combination of chickens and grouse)

South Dakota is one of the most important waterfowl production states in the country. As a primary player in the massive Central Flyway, a large percentage of North America’s ducks and geese fly through the Oahe region.

The Lower Oahe Waterfowl Access Area is a great resource for residents and nonresidents alike seeking a waterfowl hunting adventure. This is a large area of public and privately owned lands north of Pierre dedicated to offering waterfowl hunting opportunities throughout the season. Pits and strips are made available on a first-come-first served basis in designated areas, and the South Dakota Game, Fish and Parks offers FREE use of loaner trailers filled with decoys, blinds, flags and ear/eye protection. No need to haul your decoys to Pierre! Go to the LOWAA webpage to find out more.

Waterfowl hunting opportunities also exist just south of Pierre on the Lower Brule Sioux Tribe. This is a great opportunity for nonresidents who were not lucky enough in the license lottery to still find amazing hunting opportunities. The hunting can be so good in these areas that many residents even hunt tribal lands.

Shooting Hours:  One half hour before sunrise to sunset

Daily/Posession Limit:  Varies by species.  Please follow all rules and regs established in the Hunting and Fishing Handbook. 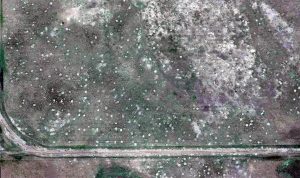 Nonresident hunters possessing any valid South Dakota hunting or fur bearer license (except for shooting preserve licenses) may shoot jackrabbits, coyotes, fox, gophers, ground squirrels, opossum, skunk, crow, and prairie dogs.  Prairie dogs are a favorite of hunters to chase when staying in central South Dakota. The Fort Pierre National Grasslands possesses some great prairie dog hunting opportunities on both public and private land. We get asked a lot about finding these towns and hunting the prairie dogs that live there. Before you do anything, go into the Fort Pierre National Grasslands Office in Fort Pierre and have a chat with forest service staff. They will have maps, and maybe a few specific locations, to get you started on the right foot.

Another great way to find huntable prairie dog towns is by searching online for them.  Not by plugging keywords into a search engine, but by looking at your favorite maps program. Prairie dog towns can easily be seen on satellite imaging. Yes, you’ll have to put in a bit of time searching, but once you find them, you’ll know.  Have your paper map alongside while searching so you can make a permanent mark for future reference.  (Insert screenshot of satellite image)

Ask before you hunt. If a prairie dog town you want to hunt is on private land (or you’re not sure) get permission before you begin shooting. You may even get a few more leads on other potential hunting spots. It is a good idea to offer the landowner a small token of your appreciation, and at the very least keep their land as pristine as you found it.

Season Dates:  You can hunt prairie dogs (and other underground varmints) all year round.

Shooting Hours:  Unrestricted for shooting prairie dogs.  You can hunt them anytime.

Prairie turkey populations have increased significantly in recent years. Nothing will get your blood pumping quite like a big tom turkey charging a decoy while you hide behind a wild three foot yucca plant. With plenty of turkey habitat open to the public up and down the shorelines of the Missouri River, you don’t even need access to private land to bag your bird. Licenses are limited, but the experience will be one you will never forget!

There are massive deer roaming the South Dakota prairies around Lake Oahe and Lake Sharpe. Rules and regulations vary by region, and change frequently. Check in with the South Dakota Game, Fish and Parks for up-to-date information, draw statistics and application details.

This is your best bet as a nonresident hunter to tag a big South Dakota buck.   Remember that all archery permits are valid within the Farm Island Recreation Area and LaFramboise Island Nature Areas in Hughes County from Oct. 1, 2020 – Jan. 1, 2021.

Application Deadline:  June 12 for residents.  Applications open for nonresidents on Sept 10th.  Nonresidents may only apply for leftover east river tags once the 4th drawing is complete.

There are great hunting opportunities available on tribal lands in Central South Dakota. All tribes have their own rules and regulations pertaining to hunting and fishing opportunities in their respective areas. Please contact the tribal entity prior to pursuing outdoor adventures on their land. Contact information for each of our tribal neighbors is listed below:

South Dakota is fortunate enough to have access to over five million acres of public land for hunting, fishing, birding and other outdoor pursuits. Always respect the landowners and wildlife when utilizing our public lands. Thank you for not leaving carcases and litter in these beautiful places. 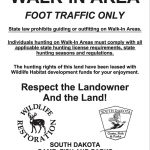 Walk In Areas: These are privately owned lands leased by the South Dakota Game, Fish and Parks using dollars generated from license sales. These lands can sometimes come with specific regulations, so please check the South Dakota Hunting Atlas for specific guidelines. Always respect the landowner and the property, or we will not have these lands to hunt in the future. 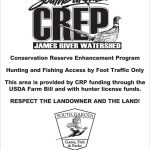 Conservation Reserve Enhancement Program (CREP): These are privately held lands enrolled in the Conservation Reserve Program. They are then leased by South Dakota Game, Fish and Parks in order for the public to have year-round hunting and fishing access. 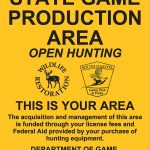 Game Production Areas (GPA):  There are areas managed by the South Dakota Game, Fish and Parks specifically for habitat development. When you see these signs, there is a pretty good chance wildlife will be using it for shelter and/or food. Much of the Lake Oahe and Lake Sharpe shorelines are lined with GPA’s. Non-toxic shot is required on all GPA’s. It is not permitted to even carry lead shot on GPA’s or WPA’s. 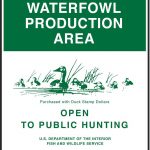 Waterfowl Production Area (WPA): These parcels of land are owned by the U.S. Fish and Wildlife Service as a part of their National Wildlife Refuge system. One thing you can almost always count on with WPA’s is the presence of cattails…a great pheasant habitat. Non-toxic shot is required on all WPA’s.

School and Public Lands: These areas are open to public hunting and fishing. They are not typically managed for habitat, so do not have high hopes for hunting opportunities when you see a blue sign. It doesn’t hurt to check it out when you are looking for spots, though.
US Army Corps of Engineers Land: Corps of Engineers land can offer fantastic hunting areas along the Missouri River. 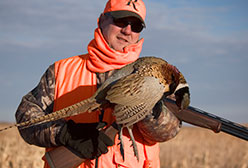