Take in the view from the Visitors Center of Lake Oahe, the Oahe Dam and the power plant. Open year round, tours of the power plant are Memorial Day thru Labor day.. 605.224.4617. www.sdmissouririver.com. Built in 1877, the chapel was both Church and schoolhouse for the Oahe Mission and Sioux Indians. Services at Memorial Day thru Labor Day. 605.773.3458. In the 1800’s the Chouteau was the largest trading post on the upper Missouri River. Not much remains today but the site is a National Historic Landmark. www.fortpierre.com. This museum is located in Fort Pierre and houses pioneer relics and a reproduction of the lead tablet that was buried in a bluff above the Missouri River, thereby claiming for France the territory that eventually became the Louisiana Purchase. Open Memorial Day to Labor Day 605.223.7761. www.fortpierre.com. Creates a lasting legacy of a South Dakota’s governors in the city where they served as leaders of the state. The life-sized, bronze statues are seen throughout the city of Pierre. www.trailofgovernors.com 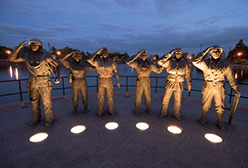